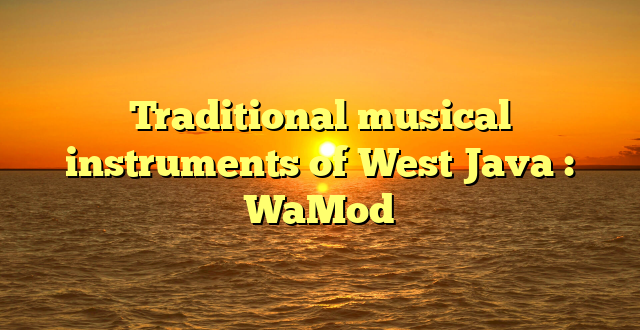 Get to know the songs, musical instruments and their arts of the West Java region

Regional art is the culture of the nation, so it  must be preserved, including West Javanese folk songs and various other arts.  Each region has its own unique songs, music, and arts. The lyrics and characteristics of music sometimes have similarities, but they are different from each other.

Generally speaking, the typical songs and music of a region is a description of the history, scenery, culture, food, and customs of that region. Every song, music and art in a region of the country that provides teaching to the younger generation always has a meaning.

It is very easy to find folk songs in the archipelago, because they are present in every area. Not just songs, but also regional dances, musical instruments and songs, instrumental games and cultural performances that bring together dances. Unfortunately, its existence has now been eroded by modernization.

There are many forgotten folk songs that have excelled with modern art. The songs of West Java are increasingly marginalized to be replaced by contemporary music.  Local music and art are indeed considered ancient and intimidating by the present generation. Therefore, it is necessary to increase the awareness of the youth to love the arts of the region themselves.

This time we have information about musical instruments, songs and regional arts so that you can get a little to know the richness of the arts of our motherland.  By getting to know the n area of art  , you can perhaps develop a love of musical products from your own country.

There are many ways to preserve the culture of the nation. Even if you are not directly proficient in various arts and are engaged in this field, you can still protect yourself by knowing and getting to know the local art.  Some of the songs from West Java are as follows:

The song  is still one of the well-known songs. In the lyrics, it describes the image of the Garuda bird (Manuk Dadali), which is today the symbol of the country, which is able to become a bird with a vibrant charm and fly high in the vast sky. It highlights the glory of Indonesia.

Snow candles are a common food of bandung. However, the lyrics of this song describe a woman’s heart where you should always be careful when facing a man, especially when choosing a life partner.

The lyrics of this song describe a woman’s heart, but heartbroken because she was abandoned by her boyfriend, one day she saw someone with a look in her eyes just like her boyfriend.

In the lyrics of this song, you will find a depiction of a human heart that is easily shaken and dynamic like a wave in the ocean.

The various musical instruments of Bandung Province also need attention to be maintained and preserved. Some musical instruments may have similarities with other parts, which is natural, because vilayaha is side-by-side and the cultures are the same.  Here’s an example of traditional West Javanese music:

There are 2 types of caring, which are for both men and women. For men, bamboo is used as a basic material, while palm tree stems are used for caring for women. The player needs to stroke one of his sides to make a sound and blow it at the same time.

Kalung is able to make pleasant sounds and is often played in art shows. How to play it with a dough. This musical instrument is made from bamboo, which is for the body and for peter.

This typical Sundanese flute is typically  a accompaniment to Western Javanese songs. There are four to six holes as a melodious regulator, and make a distinct sound as it is made from bamboo.

There are two types of lyrries, namely indang and rinsik. The indung (parent) harps have 18-20 strings and large sizes. This instrument became the head of the profiling (child) loot, which was played as a complement to the pauses between the notes of the Indung song.

This tool relies on the sound coming from inside the bamboo sticks to create a sound that is pleasant to the ear. In the Selambang areas it is played at night during cultural programmes.

In addition to the songs originating from West Java, there are also various other arts, such as dances and cultural performances, one of which is a masked dance based on the folk tale about Sunan Kunung Caste, the ruler of Syreban, when confronted with the attack of Prince Welang.

There is also a green peacock dance, which, as the name suggests, is inspired by peacocks. This dance will be accompanied by camillon and many dancers with beautiful and bubbly moves. Peacock dancers always use the  crown when wearing their bodies, which is  karen, which represents the symbol of the peacock.

Have you ever heard of Rengkang art? This local gesenia is a performance inspired by the practices of the Sundanese people for planting paddy for my harvest. It first appeared in the Sianjur Regency in 1964. Until now, it is often played in cultural parks and other art show halls.

There is also the practice of horse-tying, which is frequent in the Java region and in various parts of Indonesia. The sticky horse show is often played and overflowing with people. This art has a mystical taste, because the dancer is a trans person who rides a wooden horse and then dances alongside a trumpet.

If you want to hear different songs being sung from West Java, you can go to places where cultural performances take place  . There are many places that are often used as places to perform folk songs and various other arts. These places are used as a place for the people of West Java to showcase artistic skills and to maintain artistic stability.

There is always a special agenda for cultural programmes that all regions can enjoy every week, and foreign tourists also come to see firsthand how beautiful the culture of the country is. In addition to the local culture of West Java, various Indonesian regional arts are also on display.

As a child of the nation that determines the future of Indonesia, you must love the national culture from your own region and from other regions.  By getting to know  the various regional arts, musical instruments and West Javanese songs,  you can develop a love for the country’s art and culture.